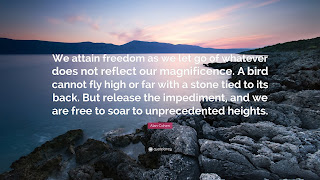 I've been spending spring break with the grandkids. Lucky kids, they have a grandma who poo-poo's theme parks and resorts, so they get to spend spring break in my old home town, Liberal, KS. Ok, in my defense, it was the easiest place to get them all together and their bachelor uncle loves having his nephews and niece invade his house for the week (the kids love it because he has all the expensive video game gadgets their parents can't afford because they have kids) and the parents love it because they get a week to themselves.
So, I was sitting in his living room this morning, pre-dawn, with one grandkid stretched out sleeping on the couch, saying my rosary and going through my litany of things to be grateful for. I got to my sobriety and I realized that a miracle had occurred actually two. The first was that I was sitting there pre-dawn with a house full of grandkids that their parents entrusted to my care, which would not have happened had I not quit drinking. The second one takes a little more 'splainin'.
See, in preparation for this teenage male invasion, my son loaded up his fridge with junk food, so much so that there is no room for ice. So, he stationed an igloo cooler outside just for ice, except, Friday night, before we arrived on Saturday, a friend stopped by and filled the cooler full of beer. There were still 18 beers in there when we arrived. Now, there are 17.
The miracle I realized this morning is that as I have been going back and forth at least a half dozen times a day to fill my glass with ice, I never once have thought about having one of those beers. The thought of them sitting out there hasn't dogged me all my waking hours, in fact, they haven't even crossed my mind. The other day, when I went to grab one for my old drinking biddy who stopped by, I never even considered grabbing one for myself, in fact, I didn't have one wistful thought about how much I miss the old days.
The obsession ends. It is replaced with something I hesitate to call normalcy because it feels like so much more.
Posted by Kary May at 10:35 AM