Getting Closer Every Day 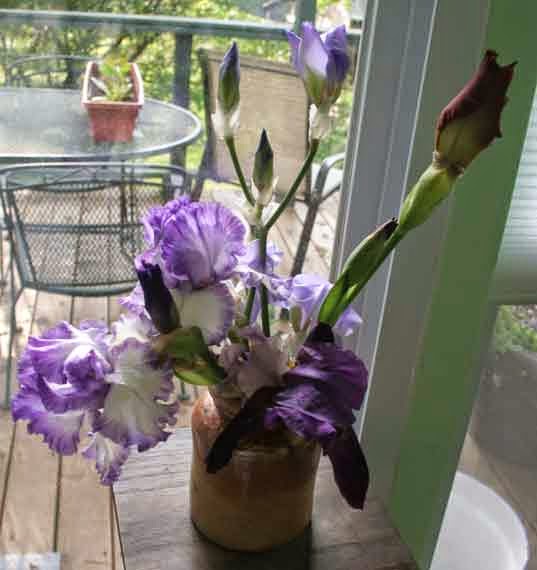 When they were little boys, my boys thought I hung the moon and dipped it in sprinkles just for them.  And I would've if I could've.  My favorite Mother's Day Memory is the Mother's Day that they all jumped on their bikes early in the morning and headed over to the nearby miniature golf course and returned with muddy bouquets of iris's that they presented to me with pride, like future car thieves handing their momma the keys to a pink cadillac.

Then things happened.  They became teenagers. I got divorced. They became resentful. I became swamped with guilt.

So I left.  Not physically, not at first anyway. I dove into a bottle of Jack Daniels and didn't emerge for 20 years.

My boys no longer think I hung the moon and dipped it in sprinkles just for them.  But I would, if I could.

I came across one of my many sporadic journals that I kept before I started blogging here.  I thought writing down all those arguments about why I should stop drinking myself to death and keeping them to myself would help, but it didn't.
In one of them, written in 2009, I believe, there is a Mother's Day Entry.

I cried when I read it.

It must have been written early in the morning because I was still boosting myself up and making excuses about why my kids might not call me, how difficult it is to get hold of me, how they're boys and boys just don't think about those things...blah, blah, blah...But I wasn't in total denial, I knew that booze was the captain of the ship that was steering a course further and further from my kids.  I could see that I was totally losing sight of land and them.  They wouldn't be able to throw me a lifeline, even if they wanted to.

I don't remember if the oldest and youngest called me or not that Mother's Day.  I know the middle one did not because he did call me a few days later to apologize about not calling me, he had a good excuse, he'd been in jail.

That Mother's Day was the turning point for me.  I made a vow, that no matter what, by the next Mother's Day my relationship with my kids would be better, I would start doing the necessary legwork and healing that was required.

Was I sober by the next Mother's Day?  No.  But I'd started this blog and I was heading that way.

This is the message that I received on fb today from that middle child.  He doesn't have an excuse this year, he's in a much better place too.

Hey mom thank you for all the love that u have gave us as kids and u continue to give us as adults. And all the patience and understanding that you showed us.. no matter what direction life may take us you will always be our mother and i know im not alone when i say i take great pride in calling you my mom. I love you mom. Happy mothers day!

I called all of my boys yesterday to let them off the hook, I am still hard to get hold of, one more barrier I need to break down.  Am I where I want to be?  No, I've let myself chicken out of facing the hard things with my youngest, we're still skirting around the issues, keeping our coats buttoned tight. (Thank you to Amy, my friend, over on Soberbia for that image and a great book recommendation)  But I'm heading to his house in Texas to dig up some bones and rattle them as soon as I get back to the states in a few weeks.

Am I where I want to be?

But I'm closer and that's a hell of a lot better than farther.

(BTW, Paul, if you read this, that middle son is the one that landed in my lap all of a sudden.) 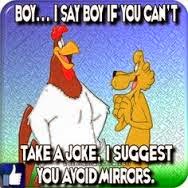 The cap'n has been buzzing around all morning.

I want to swat him, because I'm still all fuzzy headed and laying about in bed and just spent 45 minutes looking up Foghorn Leghorn quotes so I could write something really snappy to one of my friends on the Moderation Management List.  I came up, I say, I came up with nothing, so I wasted, I say, wasted 45 freakin' minutes!!  Why in the hell did I go looking to Foghorn Leghorn for inspiration this morning?

"It's amazing what you can get done when you're not hungover," says he.

"Preachin' to the choir," says I.  (And what the fruck do you think I've been trying to tell you for the last three years. But, oh yeah, I forgot, you were never hungover.  That's what you kept telling me anyway.  I guess now you know the difference)

I guess you've figured out that the cap'n is behavin' lately (a week) and that we must have had a "come to Jesus" meeting. (Yes, we did).  But more about that later.  He's decided to "essentially" quit drinking. (Can I get a collective eye roll on that?).  But he's doing pretty good so far.

He's out there digging up Coconut Trees and I'm still laying in bed.

He reminds me of what those first sober mornings felt like.

And then I wandered over to Mrs. D's Blog this morning between my Foghorn Leghorn expeditions, and she's yammering away, lah-di-dah, zippity do-dah, and all that shit, about why she loves sobriety.

Why I Love Sobriety:

2.)  I'm laying in bed all fuzzy headed and lazy and I can't blame drinking.  I haven't been able to         blame my drinking for anything for almost 3 whole years.

4.)  There are now people who know me who never saw me drunk, they don't even know that I used to drink.  They just think I'm an uptight sober person.  Hallelujah!

5.)  I remember every single thing that happened last night.

7.)  Sober sex.  It's just easier, quicker and cleaner and a lot less theatric.  (Addition to today's "To Do" List:  Burn all those old videos.)

8.)  I can make plans for later on tonight, tomorrow, next week, next month, Christmas...because I can depend on me to be present and accountable.

9.)  I'm no longer worried about qualifying for the liver transplant list.

10.)  I love myself and life again, with all of our foibles, ups and downs, ins and outs, darks and lights, hards and easy's, goods and bads, happy and sads.  I love that I feel it and live it.