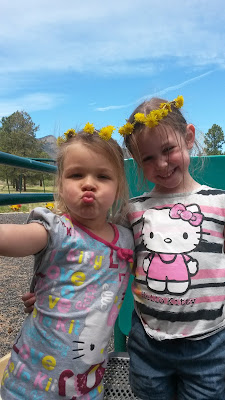 (The smoochy face Dandelion Princess is my granddaughter, Atalie Jolene, the other one is my son's next door neighbor's daughter, Riley. Riley decided I was her Grandma, too, this weekend.)

I've mentioned on here several times that I've worried about a lingering distance between my youngest son and I. He's the one that stuck with me through his high school years when his brothers high-tailed it to their dad's. He's the one that sometimes pointedly pointed out that he knew I'd been drinking in front of his friends back in high school.

One such scenario occurred during his Senior Prom dinner that I fixed for him and his date-now my DIL- and another couple.

"Do you think I can't tell you've been drinking," he asked as I served up the dessert.

He's the one who, when I wrote him a few weeks ago to apologize for everything and the distance between us, wrote back and said he's always been right here, the only distance has been in miles.

I went to stay with him this weekend while the daughter-in-law had a girl's weekend in Denver with some other Air Force wives. I don't know what made the difference, if it was that final apology, but the distance I'd always felt, the guilt, the uneasiness, wasn't there.

We hugged hard. We laughed hard, It was easy.

Sunday afternoon I was in the kitchen making dinner-roast beef and an apple pie-and he was next door playing cards and drinking beer with his buddies. At one point, he came into the kitchen and said, "You're more than welcome to join us."

When I got there, one of them offered me a beer.

There was never any question in his mind that I was joking.

"When was the last time you had a beer, Mom? Five years ago?" he asked in front of his buddies. And I know I heard pride in his voice.

"Just about," I answered. 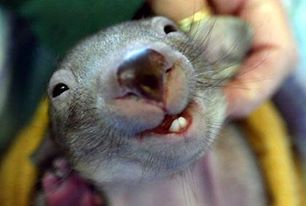 Tonight's Wombat Chat will start at 9:00 EDT, 8:00 CDT, 7:00 MDT, and 6:00 PDT but we'll keep it open until no one wants to talk anymore. Perhaps in the future, we'll figure out a set time frame, but for now we'll adjust it to the person who is hosting's location

As a mother, I have been an honoree for 35 years on Mother's Day.  Six years ago, on Mother's Day, I was sitting down here in Mexico trying to convince it would be okay if my kids didn't call me. "After all, it's so hard to get hold of me," I told myself, even though there was email and facebook and the myriad of phone #'s I'd given them.  In truth, I knew that my relationship with my children  was cracked, had been cracked for a long time, like a chasm in the earth that develops into an unbreachable canyon.  My boys on one side. Me and my drinking on the other.

I made a vow right then, that no matter what happened, that would be the last Mother's Day I would let my drinking come between me and my kids. I would start building a bridge across that canyon.  If they welcomed me when I got to the other side, or not, at least I'd built the bridge.

This is the facebook post my middle son-the one that became my son at the age of 7 when his natural mother, my sister-in-law, was killed in a fire-posted yesterday:

I would like to wish a happy Mother's Day day to the women that took me in and raised me like her own!!! There's not to many people that would do that!!!! I think without the love and support that you showed me my life could of turned out much worse so I thank you from the bottom of my heart for Saving this troubled soul!!!! You mean more to me than you will ever know I love you mom!!!!!!!

Pretty damn good bridge builder, if I say so myself. 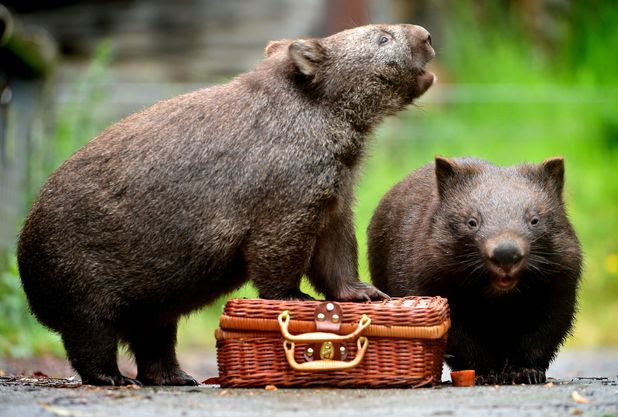 Tonight will be the second meeting of the Supportive Order of WOMBATS (Women Only Moderating/Abstinent Talking About Sobriety, Sisterhood, and Sanity) Sorry, WOMBATS is hard to anacronymize.

I have to pick up the cap'n at the airport, so I won't be there, but Ocean Bliss will be hosting. She's on Pacific Time, so we're scooting the time frame up. Either way, it will be too late for some, too early for others, and, hopefully just right for a few.

Doing Lunch With The Girls 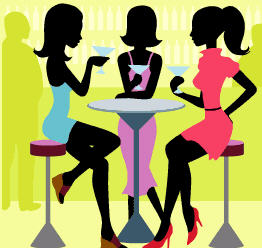 Sometimes I forget how it used to be, but just now a reminder tapped me on the shoulder.  You see, I'm "doing lunch" with some of my friends. It's actually kind of a good-bye lunch for me since I'm heading back to the states next week. One last chance for us to get together.

It's a pool party and I'm sure there will be all kinds of pool drinky-drinks. I've been trying to decide what I'll take to drink for the last two days because I've been trying to quit my Diet Coke habit and I've actually gone two days without one!  Not once have I thought about mixing up a mocktail, they're so much trouble. Even better, not once have I thought, "Damn, I can't drink."  I'll take some tea or maybe I'll let myself indulge in a Diet Coke.  I found myself beating myself up about that and I knew my friends who are still struggling with their drinking would roll their eyes at me. Hey, there are other secret killers out there besides booze, ya'll.

While I was shuffling around, putting the lasagna in the oven-cajun chicken-sausage in alfredo sauce lasagna, another secret assassin-I 'membered (getting my Cajun on) that six years ago, my day would be finished at that party.  Even if the party ended at 3 pm, I would be too drunk to do anything else, except drink some more. And, tomorrow? Tomorrow I would be sick, wouldn't even need to pencil that in, I could write it in permanent ink.  The next day? Probably still sick, if not, I still wouldn't feel as good as I do right now.

No Wonder It's So Damn Hard!

I got to read this article for my nursing continuing education hours.  I don't know whether I agree with the disease model of addiction or not-all those wordy arguments came to be meaningless to me because the only thing I needed to understand is that I needed to quit, whether I was diseased, whether my grandpa Hatch passed the bad genetics down to me, whether I was abused without knowing it in my childhood. None of it would change the final verdict.

But this article does explain to me, why it is so hard to quit. Why we can't just put it down. Why we fail at quitting so many times.

It's not all our fault.

"Editor’s Note: This is essentially  a plea for more basic research in addiction.
Class: Basic science of addiction
Research guided by the brain disease model of addiction has led to the development of more effective methods of prevention and treatment and to more informed public health policies. Notable examples include the Mental Health Parity and Addiction Equity Act (MHPAEA) of 2008, which requires medical insurance plans to provide the same coverage for substance-use disorders and other mental illnesses that is provided for other illnesses and the proposed legislation that would reduce prison sentences for some nonviolent drug offenders because people who need treatment for drug and alcohol problems or mental health issues will be more likely to improve and reintegrate into society if they receive consistent care.
Advances in neurobiology have begun to clarify the mechanisms underlying the profound disruptions in decision-making ability and emotional balance displayed by persons with drug addiction. Addiction has been divided into three recurring stages: binge and intoxication, withdrawal and negative affect, and preoccupation and anticipation (or craving). Each stage is associated with activation of specific neurobiologic circuits and the consequential clinical and behavioral characteristics.
Binge and intoxication involves the same molecular mechanisms that strengthen synaptic connections during learning and memory formation. Environmental stimuli repeatedly paired with drug use may all come to elicit conditioned, fast surges of dopamine release that trigger craving for the drug, motivate drug-seeking behaviors and lead to heavy "binge" use of the drug. Whereas dopamine cells stop firing after repeated consumption of a "natural reward" (e.g., food or sex) satiating the drive to further pursue it, addictive drugs circumvent natural satiation and continue to directly increase dopamine levels.
Withdrawal and negative affect results because persons with addiction no longer experience the same degree of euphoria from a drug as they did when they first started using it. There are adaptations in the circuitry of the amygdala in the basal forebrain resulting in increases in a person's reactivity to stress and lead to the emergence of negative emotions. In addition to the direct and conditioned pull toward the "rewards" of drug use, there is a correspondingly intense motivational push to escape the discomfort associated with the after effect of use. Many state they continue to take the drug to escape the distress they feel when they are not intoxicated.
In preoccupation and anticipation, there are changes in the function for the prefrontal cortical regions, which involve the executive processes.  The impaired signaling of dopamine and glutamate in the prefrontal regions weakens the ability to resist strong urges or to follow through on decisions to stop taking the drug.
Factors that increase vulnerability to addiction include family history (presumably through heritability and child-rearing practices), early exposure to drug use (adolescence is among the periods of greatest vulnerability to addiction), exposure to high-risk environments, and certain mental illnesses (e.g., mood disorders, attention deficit-hyperactivity disorder, psychoses, and anxiety disorders). Susceptibility to addiction differs because people differ in their vulnerability to various genetic, environment and developmental factors.
Awareness of individual and social risk factors and the identification of early substance-use problems make it possible to tailor prevention strategies to the patient. When prevention has failed and there is a need for treatment, research based on the brain disease model of addiction has shown that medical treatment can help to restore health function in affected brain circuitry and lead to improvements in behavior.
Although it is too soon to evaluate the effect of the MHPAEA and the Affordable Care Act, there appears to be increased enrollment and care delivery among patients with substance-use disorders and an overall reduction in spending on emergency departments visits and hospital stays in three states that were initially reviewed.
Important Points:
Despite reports of benefits to the public from practices and policies generated by research based on the brain disease model of addiction, mobilizing support for further research will require the public to become better educated about the genetic, age-related, and environmental susceptibilities to addiction as they relate to structural and functional changes in the brain. If early voluntary drug use goes undetected and unchecked, the resulting changes in the brain can ultimately erode a person's ability to control the impulse to take addictive drugs."
Posted by Kary May at 2:07 PM 3 comments: